LAY OF THE LAND

The Carneros AVA (American Viticulture Area) is a majestic stretch of land in Northern California that extends from the south-eastern end of Sonoma County, and reaches into the western beginnings of Napa County. 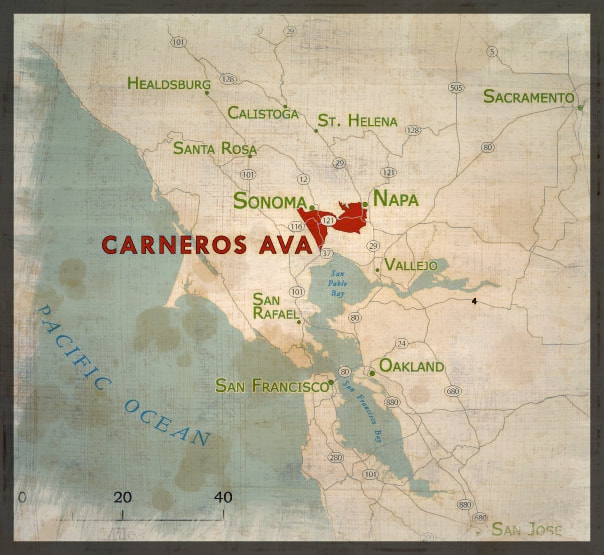 Although the first vines were planted here in the 1830's, it wasn't truly until the late 1970's and early 1980's that the area began to realize its grape-growing potential.  Notated for its proximity to San Pablo Bay to the south, the conditions in Carneros are known for thick, damp fog in the mornings as well as cool winds in the afternoons.  This climate lends itself admirably to growing Pinot Noir and Chardonnay, two varietals that can be fickle in warmer regions.

Currently there are approximately 9,000 acres planted in Carneros and the fruit sourced from here is used not just for still wines, but a lot of sparkling wine as well.  It was determined that Carneros is geographically distinct and distinguishable over other grape-producing regions in the United States, and thus, Carneros received AVA designation in 1983.

The origin of Ricci Vineyards dates back to the late 1970's when our founder, Dale Ricci, first had aspirations to transform his family land in Carneros into a full-scale vineyard.  Prior to these ambitions, the property had previously been used for various agricultural undertakings through the years.  Mainly it was used for prune production, growing hay...even grape vines were put in place by Dale's grandfather, but these were ultimately gone by the 1950's.

Unable to secure traditional financing to start his viticulture operation with established vines,  in 1982 Dale took a more hands-on approach by using rootstock and budding it to Chardonnay in his own nursery.  After slowly raising these young vines he eventually planted them in the first blocks of his vineyard, row-by-row.  Through years of hard work and perseverance, the fledgling vineyard slowly transformed into 60 acres of planted vines.

Owing to the prosperity and success of his initial vineyard, Dale ultimately took the initiative to expand his vineyard holdings, and in 1996, purchased a nearby parcel of land from his uncle who had previously operated a dairy on the property.  Although fertile and full of promise, this new land acquisition was completely devoid of existing vines, so in 1997 new planting begun.  Before too long, what was once bare dairy pastures had become transformed into a thriving vineyard and the cornerstone to the Ricci Vineyards enterprise.

Now, with approximately 220 acres planted in total, Ricci Vineyards continues to forge ahead by doing what we have all along - producing the best fruit for the some of the most revered and respected wines coming from Carneros.